Bread … just flour, water, yeast … then maybe salt, butter, an egg … maybe nothing more, maybe just a tiny more … but good grief how as much as we love it and crave it; the variety using the same basics is overwhelming and awe inspiring.

This month Karen K (Karen’s Kitchen Stories) in her debut as a BBB is bringing us a most interesting bread.  Tangzhong Bread (aka Japanese Milk Bread, aka Hokkaido Milk Toast).  The recipe is based on the book 65 degrees C by Yvonne Chen, and adapted by Christine Ho.  You will find several versions of this bread on Karen’s site but with this BBB bake she went with a whole wheat version and that of course really warms my soul.  The bread uses a Tangzhong, a concoction of cooked flour and water that is cooked to 65 degrees C or 149 degrees F.  Sounds pretty much like a roux if you ask me.  If  you don’t have an instant read thermometer cook, don’t even pretend you can make do without it, you need one.

After I’d made the Tangzhong and it was cooling, I started thinking I should really try this baked in my Pullman loaf pan but too bad it wasn’t going to make enough dough to fill my long pan.

I had the final dough ingredients all measured. Luckily for some strange reason I had left the bowl on the scale and tared it out because when I poured the Tangzhong into the bowl it measured 200 grams.  The recipe only called for 100 grams.  Woops.  I was setting up for a mis-measure disaster or total genius.  200 grams of Tangzhong = 2 loaves: That should be enough dough to fill the Pullman pan.  So, I quick like measured all ingredients for another loaf … well except no more sugar, no more butter and no more than the 30 grams of flax seed that I had already added.  I am overjoyed with this bread in a Pullman loaf pan both with and without the lid. 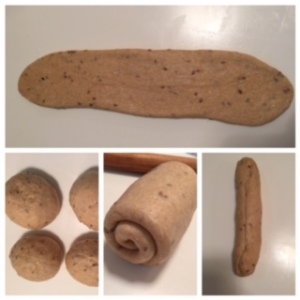 I know one bread baker who says that even bad bread makes good toast and thinks very poorly of toast.  I on the other hand have a very high opinion of toast.  I’ll agree that many times less than great bread makes pretty good toast BUT I find there is a toast continuum as there is with almost anything.  While this bread is marvelous for sandwiches of all sorts, this bread maybe the ultimate toast.  This bread maybe the very definition of toast!

And now if you’re up for my dirty little secret:  While I do finally begin to see that Gorn has really begun to appreciate, taste and even differentiate really good bread from the factory stuff (see how polite I’m being not labeling it “library paste”), he still craves his childhood baloney on white bread.  In his childhood it was WonderBread; today in Michigan it’s there’s … drum roll please … Hillbilly Bread.  I kid you not, it is labeled Hillbilly Bread.  He got one of his cravings the week before I baked this bread.  His Hillbilly was gone when I baked this but there was still baloney.  This bread is the only bread I’ve ever baked that fit’s his craving.  Light and fluffy, awesome.  With that in mind, I think this might be the first bread I bake that my 7 y/o grandson will like. 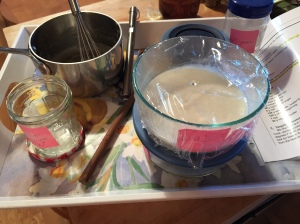 Tangzhong mixture (makes enough for two loaves)
Mix the flour and water together until there aren’t any lumps.
Cook, stirring constantly, until the mixture thickens and registers 149 degrees F or 65 degrees C. If you don’t have a thermometer, then yes, you really need to get one. Llook for lines in the mixture made by your spoon as your stir. Remove from the heat immediately when it reaches 149°.
Scrape the mixture into a bowl, and cover with plastic wrap, pressing it onto the surface of the tangzhong.  Covering the mixture surface eliminates evaporation.  Let it cool, and then refrigerate it for several hours.  I did not refrigerate either time I baked this.

Bring it back to room temperature when you are ready to use it. Or just let it cool to room temp before using it as I did.
This will last a couple of days. If it starts to turn gray, toss it.

MIXING THE FINAL DOUGH:
Makes one loaf, and is easily doubled Add all of the ingredients except the butter to the bowl of a stand mixer. You can also mix by hand or bread machine.

Mix the ingredients until they form a dough. Add the butter, one tablespoon at a time, until incorporated. Knead until the dough becomes very elastic. More is better.

Place the dough into an oiled bowl, cover, and let rise until doubled, about 40 minutes. I’m sure it could cold ferment overnight, but haven’t done it.

Divide the dough into 3 or four equal pieces and form each piece into a ball.

With a rolling pin, roll each ball into a 10 inch long oval. Fold the oval into thirds, widthwise, like an envelope. Turn the envelope so that the short side is facing you, and roll it into a 10 to 12 inch length. 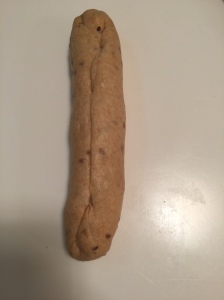 Roll that piece like a cinnamon roll, with the folded sides on the inside, and place the piece in an oiled bread pan, seam side down.

Repeat with the other pieces, placing them next to each other.

Those words “Roll that piece like a cinnamon roll” should tell you this is just begging for a filling!  I had elaborate plans for my second bake (brown sugar butter, cinnamon brown sugar + dried blue berries, etc.) but things consipired against me.  But just think about it.  If you do one loaf, you can have 3 or 4 rollings going into one loaf.  Each one of those rollings gives you the opportunity to leave it as is – just beautifully light fluffy bread – OR put in a filling.  I leave it to your imagination.
Cover and let rise for about 40 minutes, until about 4/5  the height of the bread pan.

Baked in Pullman pan lid off

Bake in a 175 degree C/ 350 degree F oven for 30 to 35 minutes. Transfer the loaf from the pan to a wire rack and let cool completely.
Pullman pan with & without lid took 40 minutes.

Baked in Pullman Pan lid on, this is the side. I love those snails swirling.

I baked it with the lid on first and we loved the bread. 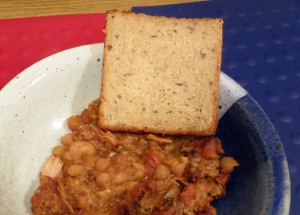 Served it one night with a French Cassoulet. Delightfully tight but light and fluffy crumb.

But it made me wonder what the crumb would be like if I baked without the lid.

Maybe the crumb was slightly more open baked with the lid off but it wasn’t a great difference.

What did you say?  Well, of course you want a slice … oh well, yes a loaf would be better.  That’s a great idea.  Just get in that kitchen and bake it!  Then pop over to Karen’s Kitchen and get the details on how to be a Bread Baking Buddy this month.

This is lovely bread.  You’ll want to check out all the Babes baking this month, we are a most creative bunch.