Our kitchen of the month today is Elizabeth, blog from our Kitchen.  Some say this is a difficult bread … I found it very cooperative in coming together.  I was surprised that you could get a starter in just three days with the chickpea flour!  The recipe Elizabeth has brought us is based on Andrew Whitley’s recipe for Arkatena Bread in “Bread Matters”, p.190-193.  I had this book on my iPad and tended to follow those recipe amounts but Elizabeth’s directions.  The places I deviated you’ll see underlined.

What would I change: Instead of fennel seeds (which I do love) I’d use rosemary.  The fennel brings out a sweetness here that was nice just not what I was looking for.  This starter has a very strong aroma that I thought would benefit from the fennel but seemed totally absent from the final loaf.  I goofed using the fennel on the topping and should have made it sesame seeds.  I might up the salt slightly, certainly I would not cut back on the salt.

If you like bread with a hefty crust, chewy crmb and intense flavour, this one is for you. It is like french Country Bread gone rustic. It is amazing what a difference the addition of chickpea flour can make to a bread […] called arkatena and made with natural fermentation of chickpeas.

Please note that the Chickpea starter takes 3 days to create.

We are enjoying this bread! just sliced, as avocado toast and for meatloaf sandwiches and just buttered toast. 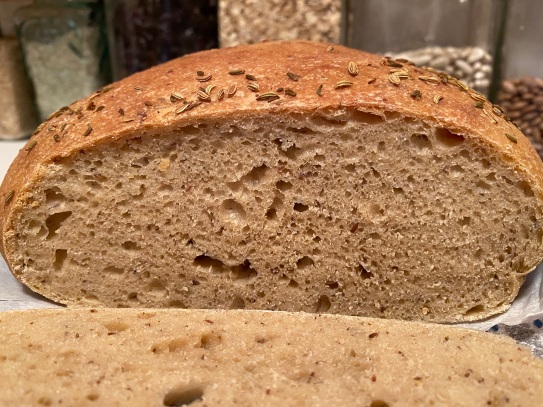 I know that in spite of all the warnings that it’s so drastically difficult, you’ll want to make this bread! To receive a Baking Buddy Badge to display on your site: make Arkatena Bread in the next couple of weeks and post about it (we love to see how your bread turns out AND hear what you think about it – what you didn’t like and/or what you liked) before the 29 January 2020.

Here’s how to let us know:

Please note that it’s not enough to post about your bread in the Facebook group. Because of the ephemeral nature of Facebook’s posts, your FB post may be lost in the shuffle. Please email if you want to be included.

If you don’t have a blog or flickr-like account, no problem; we still want to see and hear about your bread! Please email me with the details, so your Arkatena bread can be included in the roundup too.